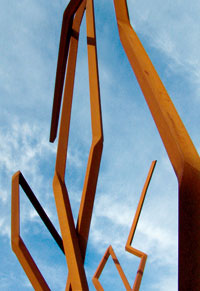 TRAK Wendisch "Fischträger"
Where there are artists, there is art, and supporting the arts also includes purchasing contemporary art works. The sylt quelle Foundation collection is ever-growing and includes works by artists from all over the world who are, or have been, involved with the foundation or have exhibited there.  In keeping with the philosophy of the foundation, many of the works in the collection were produced in cooperation with artists from other disciplines.  In the outside space in particular, the works are site-specific, picking up on the sylt quelle, the island of Sylt, or both.

Many of the works in the collection are linked to projects carried out by the Foundation such as a tub designed by the New York based artist Clemens Weiss for the play Die Untersuchung eines Zufalls (Investigation of a Coincidence) written for and produced at the kunst:raum by the Russian author and playwright Alexej Schipenko.

Other works have been produced specifically for the site itself: an eight meter high steel sculpture Escrit by the artist Robert Schad, or the word-piece flood by the Australian artist Richard Kelly Tipping.